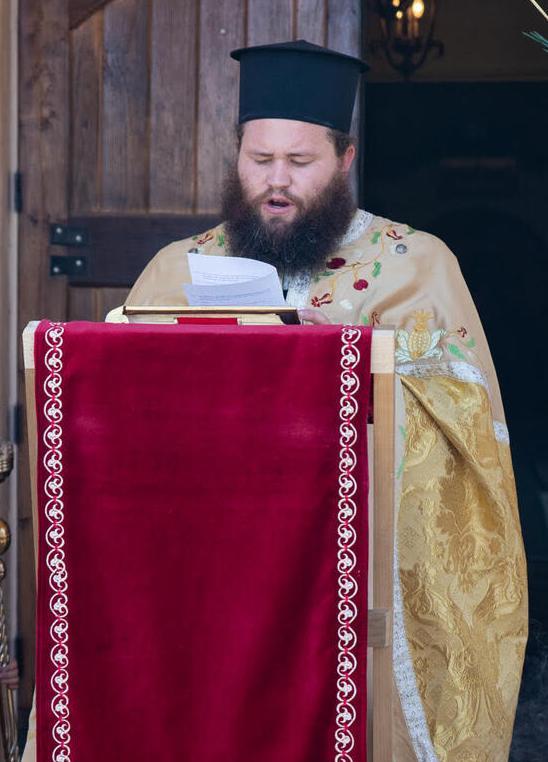 Fr Jeremiah was born and raised in Southern California. He was raised in the Evangelical/Non-denominational stream of Protestantism. After graduating high school, he entered California Baptist University for his undergraduate studies, earning a BA in Graphic Design and Digital Media upon graduating in 2009. During his time at CBU, he desired to get more serious and engaged in his faith. Apart of this process was to work towards gaining a greater understanding of his Protestant theology. This led to him to attending a more theologically serious Southern Baptist church, with some Reformed theological leanings. To add another layer to this time, in the spring semester of his junior year, he took a class on the rise of Islam and its interaction with Christianity entitled "The Cross and the Crescent." This class just happened to be taught by the local Orthodox priest. It was through this class, as well as conversations with friends inquiring about the Orthodox Church, that he began to learn, for the first time, a little about the Orthodox Church. After the semester ended and with his interest piqued, Fr Jeremiah scheduled regular coffee meetings during the summer with his Orthodox priest-professor to inquire about Orthodoxy, but it wasn't until mid-August- eight months since first learning about the Orthodox Church- that he actually attended an Orthodox Christian service. But, once he finally did, he knew there was something real and substantial there that he would never find in the Protestant world he was raised in. Two months later he was enrolled as a catechumen, and was baptized into the Orthodox Church the next year on Holy Saturday 2009- two weeks before he would graduate from CBU.

After graduating, he had a difficult time figuring out what direction he wanted to go in life. Eventually, he began working at a local bank, working there for four and a half years before leaving for seminary. In 2012, he began courting his wife, Presbytera Katherine, and they were married in March 2013. Following their marriage, Father and Presbytera, in consultation with their spiritual father, began to earnestly discern if Father should work towards attending seminary and ordination to the Holy Priesthood. This process led the young family to uproot their lives and move to New York to attend St Vladimir Orthodox Theological Seminary in 2015. While at seminary, he was ordained to the Holy Diaconate on December 11, 2016 and, almost a year later, on November 26, 2017, to the Holy Priesthood. After three years of study, he earned his Master of Divinity, graduating from St Vladimir Seminary in 2018. Later that summer, he was given his first assignment as Assistant Priest at St George Orthodox Christian Cathedral in Wichita, KS. Despite knowing his time would be limited in Wichita, it still came as a shock when he was assigned two years later as Pastor of St Sophia Orthodox Church in Dripping Springs, TX. And so, in August 2020, the Phillips family once again uprooted themselves- hopefully for the last time- to the Hill Country of Central Texas, where he is praying for a long and fruitful ministry at St Sophia.

Father Jeremiah and Presbytera have been blessed with five children thus far in their marriage.

His Grace, Bishop BASIL (Essey) was granted his request to retire in October 2022. The Diocese of Wichita and Mid-America is currently awaiting a new bishop to be appointed to the diocese, which will most likely happen after the election of a new metropolitan for our North American Archdiocese.

The Antiochian Archdiocese of North America is currently in the process of electing a new metropolitan.